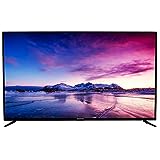 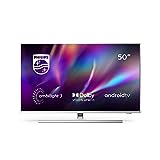 If you have the space, just buy it.
I love this tv. Some background before I write about this tv. I purchased a top of the range 65" LG OLED about a year ago and was very impressed with the true blacks a picture until a vertical line appeared from top to bottom of the screen near the left hand side and once you notice something like that you can't unsee it. It was so annoying and knowing the drawbacks lile burn in with oled, I returned the tv. I wanted to take some time to wait for manufacturers to release new 2020 tvs before making a new purchase, so as a stop gap I purchased a 55" Philips ambilight for £400, which I thought was a great deal. I was so impressed with the tv for price and loved the ambilight. The pictures quality was great and the only difference from oled was the blacks are more grey because of the backlight behind the screen, although with some settings adjustment it's barely noticed. I liked the tv so much and wanted a larger screen I purchased this one as it was on a deal for £850 and I absolutely love it. The P5 picture processor works great when watching sports or fast motion. The android operating system is much better than Philips saphi OS. Just a lot easier to use and the ability to side load apks from the usb using your own hard drive. The in build apps are great and the dolby vision on Netflix is just amazing. The remote is nicely weighted and has a mic in built for Google assistant or alexa, which I haven't tried yet. The stand also comes with extendeders, so instead of the tv sitting right on the feet, you can swap this out with slightly larger ones which raise the tv up from the feet by a few inches and it looks great on the tv stand. I cannot recommend this tv enough. So many features, android is simple and easy to use the picture quality is great and I can't do without ambilight anymore. My final point is this tv is hundreds of pounds cheaper than most of the top of the range competitors but in my opinion, it's just as good.
Overall a good TV
Bought this to replace my mum's aging Samsung. The picture is very good and the Ambilight feature is fantastic, however, I'm a little bit concerned about the Android 9 OS. I've had to reboot the TV twice as one of the apps crashed, the built in web browser, also the TV would not power on properly and suddenly rebooted itself...I hope these issues are resolved in a future update.
4k true 10bit panel for best colour reproduction
Philips Ambilight 43PUS8545 Picture= 5/5 (43" 4k true 10bit panel is great, Try playing Blue planet on this thing, picture has great colour, real depth to the image shown, great colour reproduction) sound= 4/5 (no sound bar required here) Ambilight = 5/5 ( adds something extra to the experience operating system= android tv, I really like it, its nicely presented, easy to use, all the apps I could wish for which are here...bbc iplayer, itv hub, more4, five On-demand, netflix and prime video, you have the google play store here also for further apps, the philips app store just ignore it, it hasn't improved since my last tv specs= quad core cpu, 3gb of ram, 16gb onboard storage, 43" 4k true 10bit panel, not the (8+FRC) upscale that most manufacturers use. Im really glad I took the jump on this Tv, I was darting back and forwards between options but I felt £450 for a true 4k 10bit panel was a steal, the app store hasn't disappointed, its nippy, the controller feels quality and responsive, Im really happy with this buy overall.