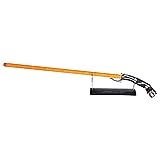 Gorgeous. Just gorgeous
Unboxing this sabre is an absolute treat. After waiting what seemed like an eternity for its release this is an almost identical copy of the 2008 force FX signiture series count dooku saber. The activation switch is black as opposed to chrome on the 2008, the sound effects are slightly different and the sound vent pattern on the base differs slightly. It's dated 2020 on the base which is the most obvious way to tell you have a new one. Great as a functional display piece that lights up, hums, growls and the sound varies as you move it around and make light contact. Not a kids toy and definitely not for dueling. You'd break it very quickly. Overall fantastic sabre, probably the best of the black series so far and great value for money. Great addition to any sabre collection.
A worthy addition to the Force-FX line
I was in two minds as to whether to get this as the curved hilt was never my favourite design, but I'm glad I did add it to my collection as it's one of the best constructed and nicest lightsaber replicas in the black series line. Solidly built with a chrome metal hilt with rubberised grip. The blade is also very bright (the red blades don't tend to be as bright as the blue and green blades due to light wavelengths) so make sure you use fresh batteries if you want the full effect! The sounds are also very loud with the combined battery pack/speaker unit as the entire pommel that screws into the base of the hilt. This also makes it one of the heaviest lightsabers available - so be aware of this if you're planning on duelling or spinning this around. In spite of this it's surprisingly comfortable to hold in the hand and is well balanced. Worth picking up if you're looking to add to your collection or are a fan of the prequel sabers.
It’s the collector’s piece you’ve wanted forever.
Count Dooku’s lightsaber is highly sought after, so it was greatly anticipated when the black series announced Dooku would be getting another FFX saber release. Unlike the previous one around 2008, this saber is much thinner, and thus, has a smoother, more effortless swing. Visually, it’s a beauty. The chrome, countered by the flat black grip, and the crimson blade make for a Star Wars collector’s dream piece. The listing says it takes AA batteries, it’s actually AAA batteries it takes. My only real complaint is the soundboard. It’s been years since the last Dooku saber, and we still don’t have the Sith ignition sound effect. It’s the standard soundboard, but I’d love to see a difference in sabers, having those characteristic sounds. Despite that, it still gets a 10/10 from me. 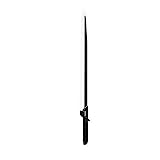 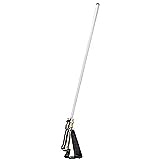