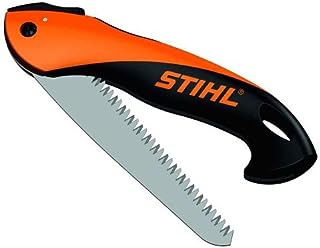 Popular but flawed
Yes they're very popular, mostly thanks to a ray mears book years ago that inspired so many bushcrafters. BUT, despite its brilliant cutting ability, its lightweight design and folding ability it has one vital flaw. One share by many a folding saw; weak blades that easily bend. The reason is the design. I've had so many brands and finally replaced my Bahco one recently. If they fold the folding point will provide a pivot for a bend somewhere down the shaft to occur. I full tang (fixed blade) saw lasts much better and doesn't suffer from this nearly as much if at all in my experience. So yeah, folding to pack for lightweight packing is great but if you're planning one of these as an INCH bag addition, think again. It wont last the apocalypse
The Classic Bushcraft Saw
This saw is pretty universal among British bushcrafters and after some use it's easy to see why. First, it has great cutting ability.The saw takes a couple of uses to strip away the coating from the teeth but once it does this saw cuts very well. A piece of wood roughly as thick as my arm takes about 30 seconds straight sawing but this figure is obviously subject to the wood type. Anything thicker tends to take closer to a minute and you really wouldn't want to cut anything wider than say, a CD with the saw (although it is just about possible). Second, it's lightweight. I'm a middle of the road backpacker as far as weight goes. I wouldn't take anything unnecessarily heavy on a trip but I won't spend hundreds of pounds on saving weight either (as an example, my overnight bag equipped for a bushcraft overnighter typically weighs in the region of 11KG) but I wouldn't thick twice about not bringing the Laplander. I forget it's precise weight, but it's easily light enough and it's use so essential for bushcraft that I have no issues bringing it along. Furthermore, it's obviously compact so you would attract far less attention as this is hidden than you would hefting an axe around (if you normally do). Third, its robust. At a first glance the axe seems a little fragile. The length of the blade compared to it's slender width obviously means it's somewhat bendy, and the frame and lanyard almost seem cheap. However, the saw has stood up to some good use and abuse and it's my belief that it only feels cheap if you are unaccustomed to it's light weight (see above). Once you get over that, you realise the materials used in the saw may be lightweight but are also of a high quality. In conclusion, the saw is light, reliable (recommended by several bushcraft 'celebrities' and survival experts), and good at it's job. It also has some nice features, like a curved, comfortable handle, a locking system (locks both shut and open) and a lanyard hole (though the cheap imitation leather lanyard provided is a bit annoying as it keeps getting caught in the blade). The only reason for 4 stars not 5? Price. It's countless recommendation have earned the Laplander a little price hike, and the cost of spare blades are as much as buying a whole new saw in some cases. Also, some claim to have found cheap £2-5 saws with similar cutting abilities at stores like B&Q, though no-one seems to be able to actually provide a comparison.... All in all, a good product.
Lightweight but mighty.
While looking for a saw I consulted reviews from all over the place and time and time again this one kept coming up time and time again as a fantastic product. So I decided to get myself one. The price was very reasonable. My first impression before I’d even had it out of the packaging was just how light it was. I’ve not weighed it but it’s considerably lighter than my Leatherman Surge. I’ve seen a few people who had issues with the lock button but I haven’t had that problem, the lock works perfectly and when opened has no movement in the blade at all. I took it to a few 4-6 inch branches to cut some logs for drying out and I am amazed at just how quickly it cuts with hardly any exertion on my part. All in all I’m very happy with my choice and would absolutely recommend this product to anyone looking for a light but tough folding saw. 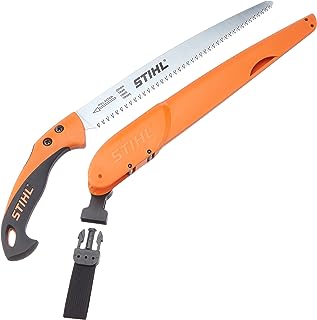