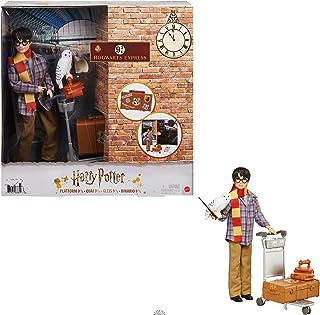 Cute figure with accessories
This is a cute figure that comes with plenty of accessories. It's packed in a large, impressive-looking box, and the cardboard insert can be used as a display for the figure. It has a large photograph of the Hogwarts express, plus a wall section with a hole that can be used to position the luggage trolley halfway through. It's not really strong or stable enough to use as a playset though. The figure is well made and has fabric clothes, though they are fairly basic without much detail, and the scarf looks quite flimsy and as though it will fray. Harry's face doesn't look much like the movie Harry but it's pleasant enough. Also provided are a suitcase, Hedwig, a stack of books and Hedwig's perch, a letter to Hogwarts, and some stickers to decorate the suitcase with. Purists may argue that the letter and the Hogwarts scarf would not be present at the same time (the letter would be for his first visit, the scarf would be worn on later years) but this is probably not an issue for most people! Unfortunately the stack of books and perch are just brown plastic without any other colour/detail which lets them down a bit. Overall though, this is a nice selection and should please collectors and children.
Can’t wait to give this to my little one!
Bought on offer for £16.49 and so glad I did! It looks like an amazing set. My little one will be thrilled to get this on Christmas. Amazing gift even at £21!
Mostly well-detailed and versatile Harry figure
This is a pretty good item that sits on the line somewhere between playable doll for kids, and poseable proper memorabilia-type item, and manages to do an alright job of both. The detailing is rather nice. Harry himself is a little Daniel Radcliffe-ish without being the spitting image, though the glasses are quite thick and almost more Clark Kent-like. Some bits feel a touch basic, like the luggage trolley, but the level of detail on the clothing fabric, on the owl and on the letter of acceptance are all notably rather good. Some of the use of colour is more toy-like and the hands and wrists are decidedly doll-like but overall it’s a nice representation of the character. The durability is good too. It has a nice firm poseability to it that allows you to place it in a realistic and moderately dramatic pose (albeit with the neutral face), but you could also give this to a child who only just meets the “6+” age criteria and still be reasonably confident that it will withstand a bunch of bending and stretching, and at a stretch, a play-fight with the brother’s Lego monsters! The presentation is good, with a gift box doubling as a scene, and this should elicit some squeaks of excitement if it gets unwrapped by a Harry Potter fan at Christmas.